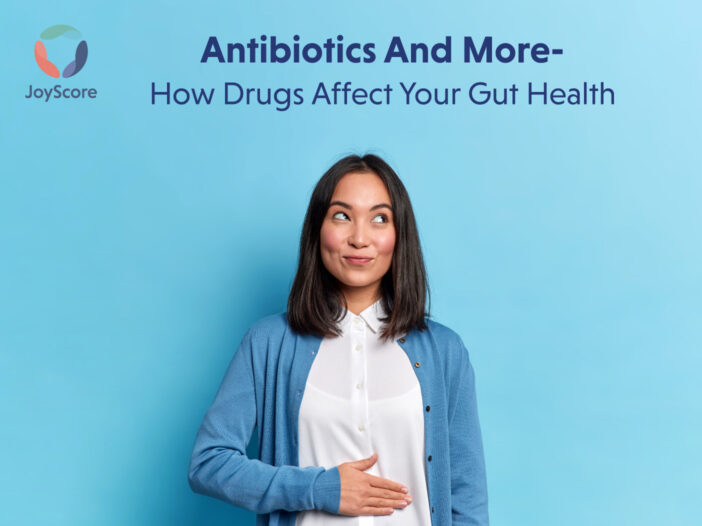 Antibiotics And More- How Drugs Affect Your Gut Health

When was the last time you popped an antibiotic to cure the minor flu or an upset stomach? Are you someone who resorts to antibiotics even for the smallest of infections? Then it’s definitely a thing to worry about.

Let’s delve deeper to understand how antibiotics and other drugs can affect your body, specifically your gut health.

Our gut is home to trillions of bacteria, fungi, and even viruses. Together, these microbial communities comprise the gut microbiome. Any imbalance in these microbial populations may lead to impairment of gut functionality and can also give rise to several gastrointestinal disorders.

Several commonly used drugs can affect the gut microbiome. These include both antibiotics as well as non-antibiotics. Antibiotics are medicines that are given to cure infections caused by bacteria.

All these medications have the ability to alter the gut microbial composition. And changes in the gut flora are found to be associated with liver diseases, diabetes, obesity, cancer, and even some neurodegenerative diseases.

Do you often wonder why the antibiotic you took last time stopped working this time, even though you had the same infection? Yes, this happened because the infection-causing microbes had developed resistance against this antibiotic and had nullified its effect.

Ever pondered what happens to the drugs once they are inside your body?

Most medicines move through the gastrointestinal tract, get absorbed in the blood, and then finally reach the target organs where the infection exists.

This is one of the greatest reasons why most drugs affect your gut health.

Antibiotics exert their effect either by killing the infection-causing organisms or preventing them from spreading and multiplying. Antibiotics do not act against viral infections such as colds, sore throats, flu, or coughs. Instead, they block the essential processes in bacteria, thereby killing them. They can also stall the bacteria’s ability to multiply. This, in turn, supports the natural immunity of the body to fight off bacterial infection in a better way.

But this also comes with its downside. These drugs also affect your gut health in the process of curing you from a bacterial infection.

The gut microbiome is dynamic and changes with changes in the diet, exercise, sleeping pattern, and even the medications one takes.

Imbalance in the gut microbial communities, also referred to as ‘dysbiosis,’ may lead to an overgrowth of bad bacteria in the gut. This, in turn, may pave the way to a plethora of gastrointestinal issues and many recurring infections.

Antibiotics, although life saviors, come with their side effects, such as killing the good bacteria along with the harmful ones. When a person is on a course of antibiotics, they should try to mitigate the side effects of these medicines by restoring the microbial populations in their gut. This restoration is important for the maintenance of good gut health and the overall health of the person.

Several drugs and drug combinations can negatively affect the microbial composition as well as the state of their existence and functionality in the gut. You must have observed that you get an upset stomach and diarrhea; if you are on a course of antibiotics for some infection or if you have had surgery.

Here are some side effects that regular antibiotic consumption can have on your gut:

Studies show that healthy people have a greater diversity of microbes in their gut than people with chronic ailments such as Diabetes, cancer, cardiovascular disease, and even obesity.

A less diverse microbial flora in the gut may lead to a reduced capacity of these microbes to produce beneficial substances in the gut. As a result, the individual can develop gastrointestinal disorders and other ailments.

One of the most important side effects of taking antibiotics regularly is that the equilibrium of good and bad microbial populations maintained in the gut goes for a toss. The bad bacteria start overriding the good ones, thus leading to a diseased condition.

Overuse of antibiotics can also lead to antibiotic resistance, which means that some bacteria develop resistance and prevent the antibiotic from killing them. They tend to grow even in the presence of antibiotics. The mechanisms by which they do this are complex.

Another major side effect of not using antibiotics judiciously is the effect on the body’s immunity. 70-80% of our immunity lies in the gut, and there are different types of immune cells that are present inside the gut. Antibiotics can affect the development and function of these cells, thus making us susceptible to many infections.

So if you think that antibiotics can cure everything from coughs to colds to infections, then you need to think again and understand the cons of overusing them.

Now that you have learned about antibiotics. It’s also important to understand how other drugs affect your gut health. These include the non-antibiotics.

Several other drugs can affect our gut health negatively, and these include:

What can you do to mitigate the side effects?

Do not take antibiotics unnecessarily; take them only when you need them or when the doctor has prescribed them. Always include probiotics and fiber-rich foods when you are on a course of antibiotics.

For more information on health and life, download the JoyScore App.